wow. I’m a bad blogger. It’s been about two years since my last post, and there hasn’t been a lot of activity on the layout to comment on.

I promise from this point forward to start to try to be a better blogger. Some upcoming topics could include:

Finally, here’s the track plan that I’ve been working from. No real changes, except getting rid of IBM, and replacing it with Howden and Parson’s

It turns out, that a friend’s father worked in one of the buildings on the real spur, the Howden and Parson’s plant. It’s not on the track plan, but it needed to be! Stay tuned for more!
The John Ingliss plant building is still alive and kicking, but is now a self-storage building. I fixed the track, and have started on the plant

I’ve built some mock buildings to fill up the layout, and am rather happy with the results.

I’ve experimented with some ti

I’ve now had ‘three’ operating sessions on my layout, and it runs reasonably well. I do have some problems:

On the other hand, the layout as designed (not by me, so I can brag) has a lot going for it:

All in all, the layout is coming along, and I can start thinking about adding scenery and buildings, while I ensure that the trackwork is all bulletproof.

Overall, I’m very happy with the layout, and am looking forward to operating it regularly alone, and with a crew of one or two people!

A very wise person once told me, that a lot of people get this wrong in model railroading. It isn’t about laying good track. It’s about laying track that your wheels work on. One normally leads to the other, but it doesn’t matter how good your work looks, wheels and track need to be treated as one thing, and the cars that sit on the trucks as another.

I’ve been learning that out on my layout. I ran cars with trucks like this (but rightside up) 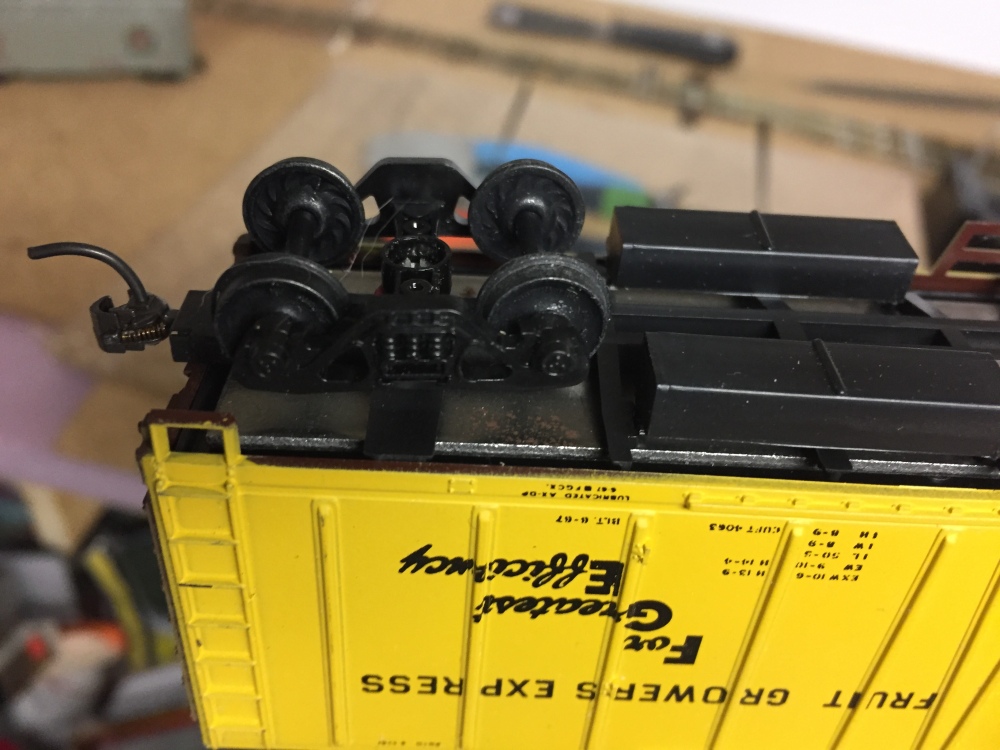 for months, and never had any issues. For my ‘first evah’ private operating session, I added a trueline caboose, with this lower profile wheelset

which really, isn’t a big change. WOW. the van derailed reliably, and regularly on one section of track. I had embarrassed myself.

I sat down, unspiked the rail, cut it with cutters, and remeasured a 3 foot section inside a curve. The results are much, much better, and the gap caused by the cutting doesn’t seem to be a huge issue yet:

There are a few more spikes than I’d like, and a LOT more empty holes on the track, but the van’s trucks roll smoothly around the curve, so that’s what’ s important.

Coincidentally, right at the end of the curve, 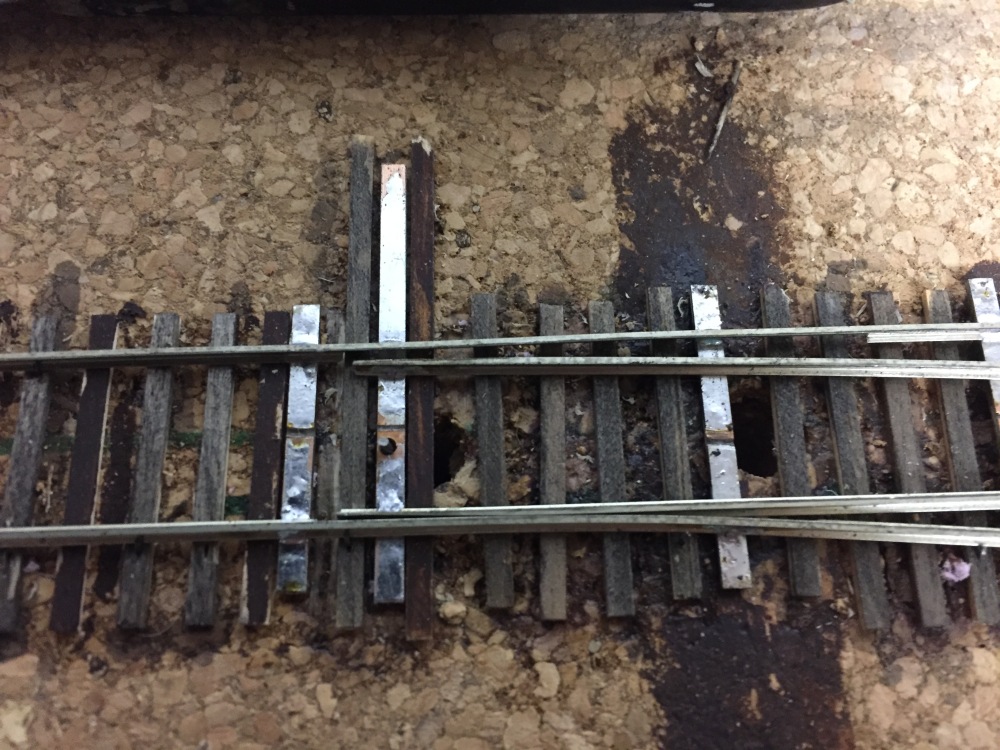 I have a turnout that doesn’t quite work:
When the drawbar is all the way down, and I want to go straight through the turnout, the  ‘lower’ point doesn’t quite reach the rail. So far, I don’t think it’s causing problems, but I think I’ll probably have to resolder the rail, before I get too much further on anything.
This photo also shows why it is so important to lay once, measure twice. due to forces beyond my ability to think, I planned to lay the drawbar for this turnout right on top of a supporting joist. OOPS. I ended up doing this (like 3 times) on the layout, and decided to move all three of them a few centimetres. *sigh.

So, it’s been more than a year (WHAT!!!), and the track should all be laid by the end of this weekend. I have two straight sections of track, about three feet long, going into the Howden & Parson’s plant (formerly IBM factory), and then I’m done!

It’s been a slow, slow experience, but there are some highlights.

While telling friends about where I was going to build my layout, a friend informed me that his father worked in one of the factories serviced by CP. I immediately decided that the Howden & Parson’s plant needed to be included. I’ve since discovered that (like most buildings) it is still standing, and has been repurposed as an athletic facility. Many of the details of the building have changed, this is a photo of it from December 2016: 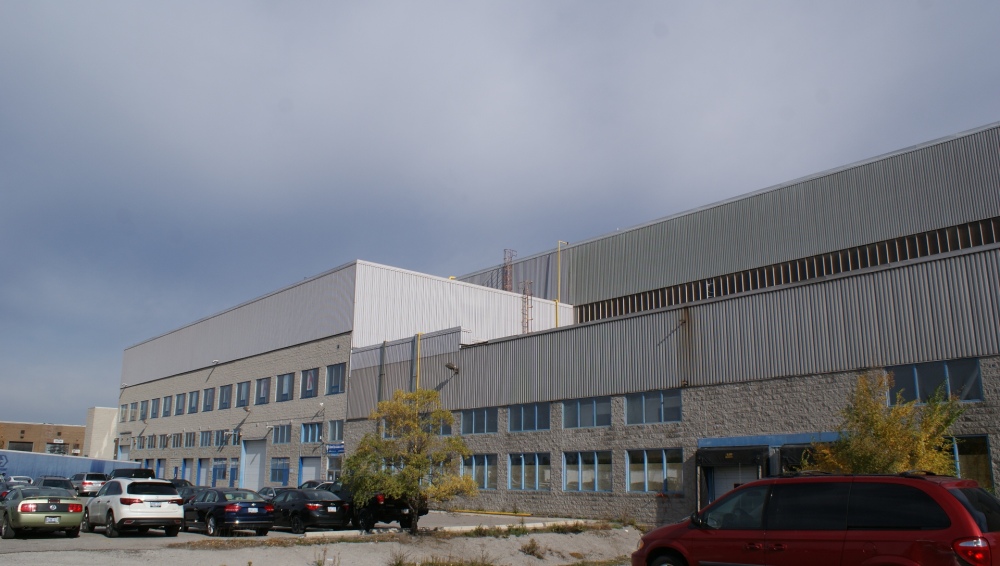 The building has changed significantly, since my 1969 aerial photos. According to my source, there were two tracks into the factory (I saw evidence of three doors large enough for a boxcar to enter), and one track to the North side of the building, into a separate structure which held an annealing furnace.

This is why it’s so important to check, and recheck your sources. I clearly remember that there was only one track into the factory, but when I went back to look at my info again, there was definitely two tracks going in. Aerial photos from 1969 clearly show only one track going in at the South side of the building, so I have plenty of options.

My plan is to flip the building and rotate it 90 degrees, so that the (current) North side of the building is parallel to my tracks, and include one track into the structure, and another into the annealing factory.

Trevor and Mark came over one day in July to install in-street turnouts. The day was successful, the turnouts were installed, and I learned a lot about being super careful, and thorough with trackwork. They have performed like troopers, ever since! I’ve also discovered that many hands make light work, and am trying to figure out how to trick more people to show up and help out!

Actual on-site visits are wonderful (if you can do it). In December 2016, I made a (very short) road trip to visit some of the buildings still in existence, and discovered that the John Inglis plant is still standing, was repurposed as a self storage facility, and that the siding used for the plant was actually on a rather sharp curve! The building also juts out to meet this curve. I am going to have to revisit that siding, to get a curve into it!

I love it when a plan comes together!

I’m so close, and for the most part, it’s working out VERY, VERY well. There are dead spots, but I believe that the track needs to be cleaned better, and wiring needs to be solidified.

So, this morning, I finished off the wiring of the first leg of the layout. I now have track laid up to the street track, and have two team tracks, and the Ingliss factory to service! I’m about to make up some car cards and waybills, and RUN MY RAILROAD!

Not being especially sure about what to do, my plan of attack is to:

Like any well laid out plan, it rarely lasted past the first meeting with the enemy, but I think I’m doing alright.

I’ve carefully placed the turnouts, and marked the cork with a red sharpie.  Final track placement will be done with a black sharpie, so that I can see what is real, and what is just planning. 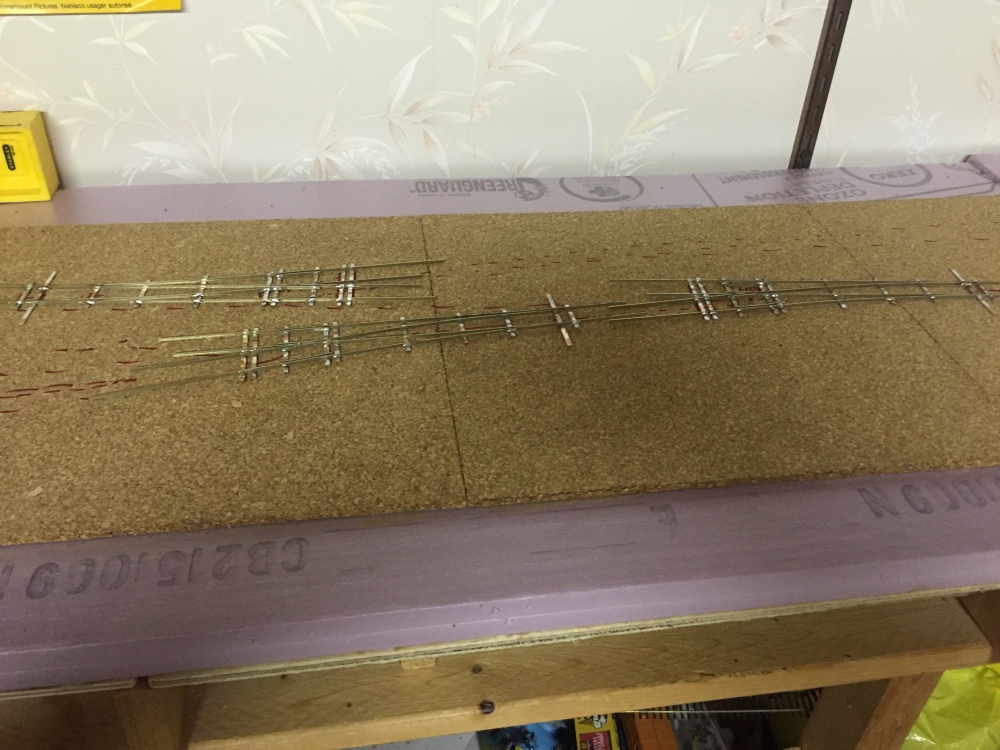 The turnouts are ‘lined up’ properly, my curve to the right has been planned, and the straight team tracks and the track into the corner have been plotted, and re-plotted several times.  I’m not too sure if I will extend the cork to the left and right, probably not, to give the ground a bit of up and down.  I’m thinking it’s not an issue, until after I start scenery, or the track gets too close to the edge. 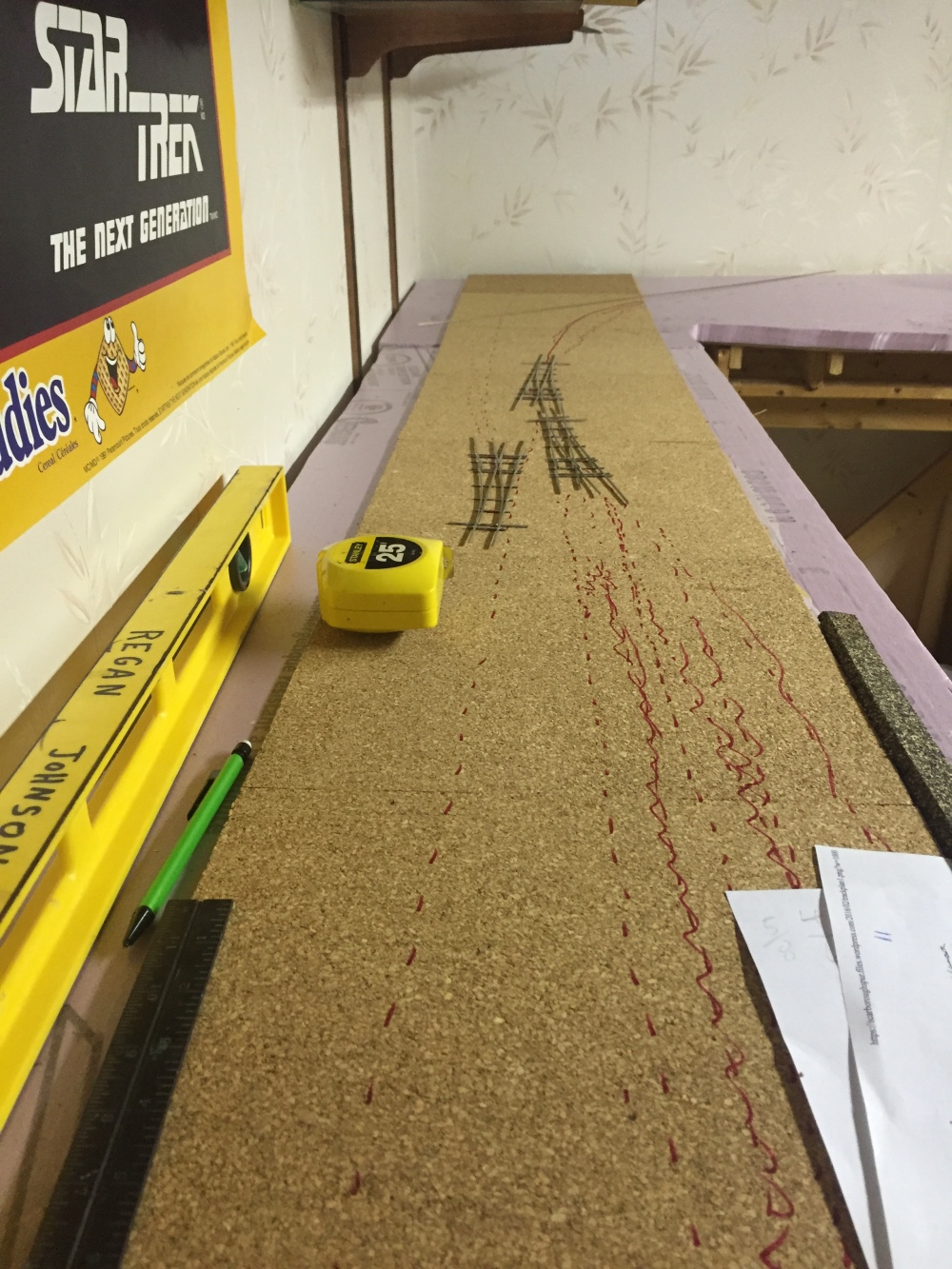 With everything drawn out, I had to start thinking about colouring ties.  I prefer to stain wood, so that the grain comes through.  I borrowed a technique that I used from buildings, and soaked the individual ties in rubbing alcohol/India ink solutions.  The ties soaked up far too much ink, and didn’t get the variation in colour that I wanted.  They also took a LOT more time per tie than I wanted to spend.  I also tried painting a couple of ties with stain, so I think I’m going to go with staining ties, and colouring individual ones with an India ink wash.

Most of the ties were dunked and pulled out of the India ink weathering solution.  there is nice variation in colouring, but it wasn’t fast enough to do for my liking. The brown ties at the bottom were stained.  I expect that I’ll go with that.

Finally, here it is, the money shot:  Ties being glued down with diluted white glue.  They were weighted down, and are drying as I type.

The ties are being glued down.  There is one tie out of alignment.  I didn’t see it until I looked at this photo while I was writing this blog.  I’ll probably leave it alone, and blame it on a sloppy work crew.  You can see my tie jig to the right. It’s got room for about 50 ties, so I can get a decent number of ties done with each ‘load’ of the jig. There is a little bit of room for the ties to wiggle, so they are not perfectly straight or equidistant.  I’m hoping that it looks good, so that I can justify my laziness in building the jig.

There’s a new member in my family of locomotives.  It’s very tiny, and won’t see the light of day for quite some time, but I’ve got one.  I recently purchased an S13 body conversion kit from a friend.  He had bought a few, but his plans changed, and I offered to take one off his hands.  The conversion kit is easily converted to an S11.  The S11 was used by CP in limited numbers (10 were built).  Some were used on my spur.  The photo of CP 6617 at the top of this blog is of one of them.

I’m looking forward to welcoming my new baby into the fold, but I’ve got a lot of tracklaying to do first!

I’ve also reached a milestone.  I have 6 switches built, and am able to start laying track!

The section at the bottom of the trackplan is where I’m starting first.  I need three lefts to start.  I began this adventure by making three rights, so I’ve caught up with the lefts, and now have enough to go about 3/4 of the way around the room.

With the teardown complete, the next step is to build up the layout.  I am working from the plan, and going to be careful enough, but not too careful.  I’ll probably come to regret that decision, but what it means for me, is:

The world will be built up with Luan (it’s now called underlay), 1″ foamboard insulation, and then cork floor tiles that I found in the dollar store, and happen to be almost exactly the same size as cork roadbed.

Well, There was a bit of sadness, and a lot of oh wow, look at that, and very little “What the hell?”, but the old layout has been taken down to the benchwork.

Here are some highlights of the work:

Three (THREE!!) jars of screws pulled out of the layout.

Lots and Lots of old 3/4″ plywood sub roadbed.  This time, I’m going with 1/4″ flooring underlay, one inch of  pink foam and then 1/4 inch of cork.  Not roadbed, since there won’t be a roadbed, cork tiles everywhere. 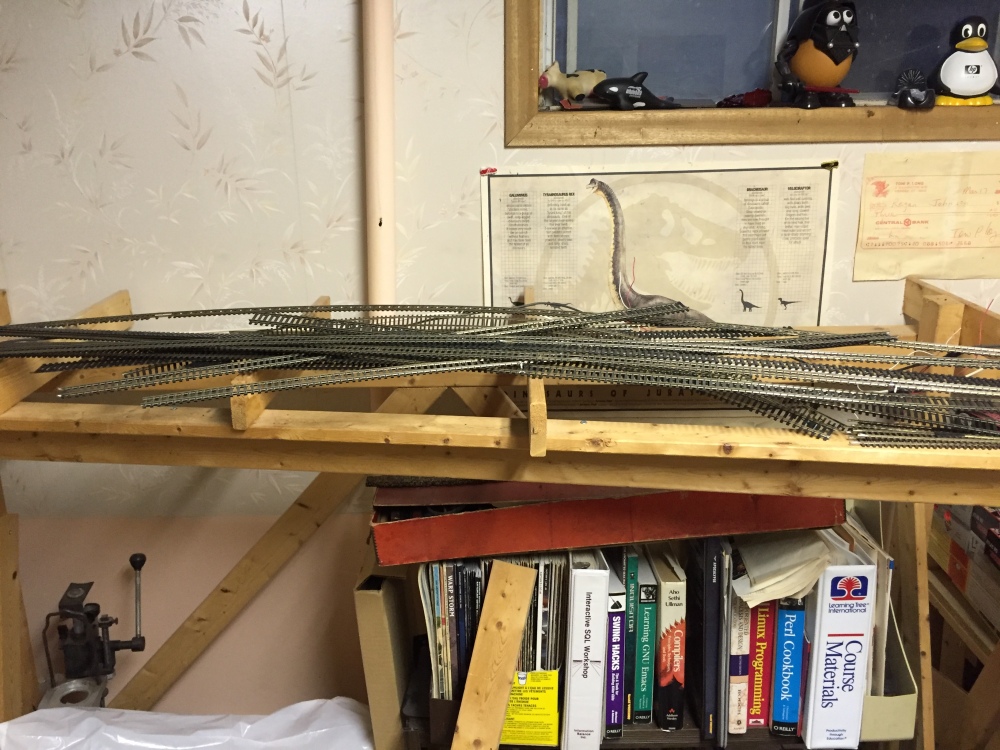 The result, down to the benchwork

More right down to the benchwork. 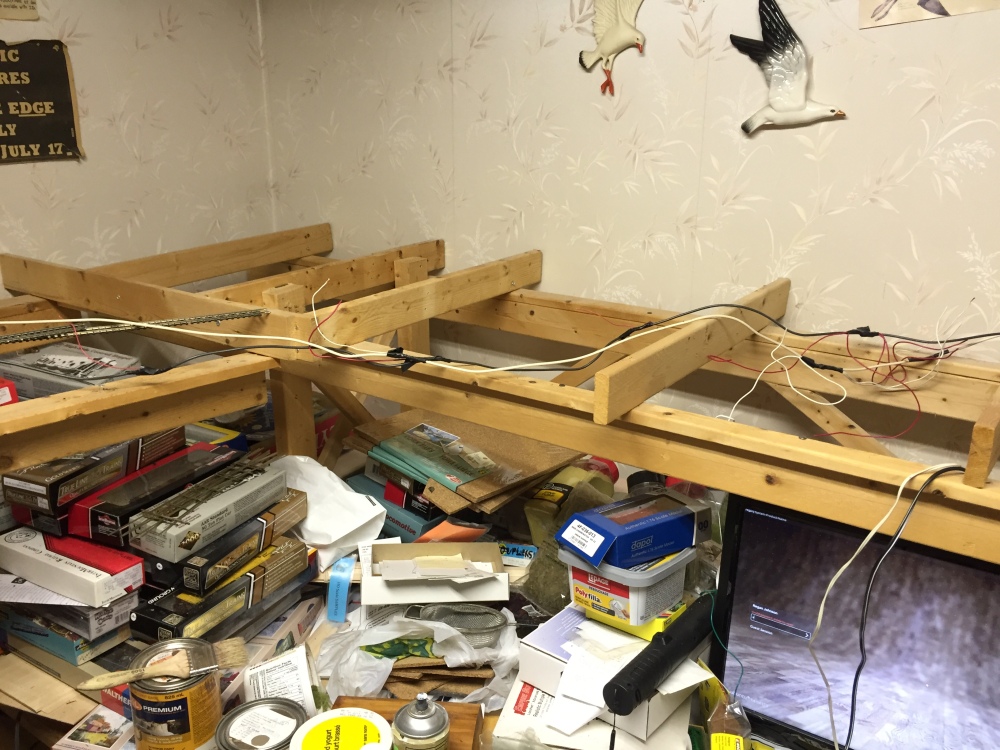